An Apparel Social Entrepreneur Feeds The Hungry, While Ramping Up Company Growth 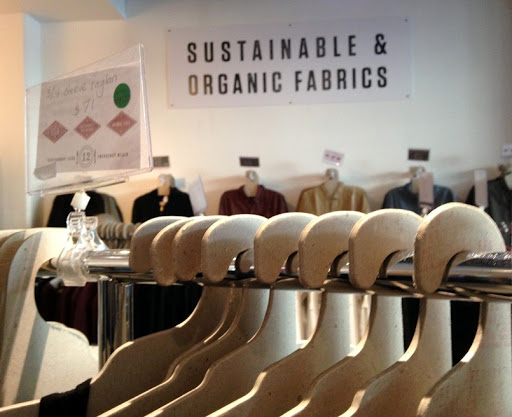 The company, which designs and sells clothing, donating $1 to a food bank or other organization providing emergency meals to hungry Americans, started doing its bit to help revive local Main Streets by moving to a brick and mortar store in downtown Tuscon, began including brands from other designers, expanded its revenue model and forged an ambitious plan to change the shopping experience. And it’s helped pay for 474,592 emergency meals.

In the process, cofounder Alok Appadurai, who launched the company about three years ago out of the yoga/dance/photography studio he ran with his cofounder and then-wife Jade Beall, has stayed true to his mission: sell clothing made in the U.S. using a network of locally based suppliers and only sustainable, animal-free products.

Appadurai opened his store in May, 2014,  in a 1,000-square foot space on Congress Street in downtown Tucson. Eschewing places in malls or other high-end areas, he realized he could play a role in an effort to revive the down-at-the-heels neighborhood by setting up shop there.

“Congress is a real success story,” he says. “The opportunity to open on a Main Street coming back to life doesn’t come around very often.”

At the same time, he decided to expand his inventory to include clothing made by other designers also producing locally-made products with eco-friendly fabrics. “These people are in the trenches,” says Appadurai. “Why shouldn’t we support other brands around the country?” It would have the added benefit of letting the store sell different categories of clothing. Now, in addition to Fed By Threads T-shirts, hoodies and other apparel, it features about 20 brands.

Plus he started ramping up another service: doing custom printing for companies and nonprofit customers. About half of revenues now come from that business.

The store is really one step in Appadurai's long-term goal: to turn the experience of shopping for clothes into a Whole Foods-like educational experience and increase shoppers' awareness of how clothing is made and the conditions of textile workers. Since the 2013 Rhana factory collapse in Bangladesh, which killed more than 1,000 people, he feels that more consumers have become aware of the appalling conditions these workers labor under. That's partly a result of publicity by Fashion Revolution, a European group formed after the tragedy and its Who Made My Clothes campaign. In fact, according to Appadurai, over the past few years, he's seen much more consumer awareness of all the issues he's trying to address.

To that end, each item of clothing in the store includes a rack sign with a few points: the number of meals the item can pay for, the city and state where it was produced and the material it was made from. "When people can see where every garment came from, they feel they can have an economic impact on people's lives," says Appadurai. Plus as part of the "body positivity" movement, pictures used in social media or displayed at the store are of real customers as they really are-i.e., no airbrushing allowed. There's also a sign in dressing rooms that says, "Zero fat talk allowed."

The plan is to use the store as a model for locations in other cities with a lot of like-minded consumers. (Think Seattle, Portland and Brooklyn). Appadurai is hiring a seasoned creative director to help with that effort.